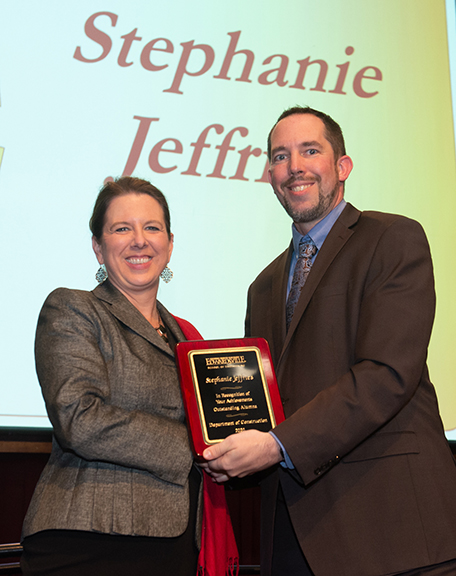 Stephanie Jeffries was recently named the 2020 Outstanding Alumna for the SIUE School of Engineering construction department. Jeffries is the Project Executive for Healthcare and Life Sciences at PARIC. Since graduating from the SIUE with her BS in Construction Engineering, Jeffries has managed and developed more than a billion dollars of construction projects.

Chris Gordon, Ph.D., Associate Dean of the School of Engineering, says, “Stephanie Jeffries stands out as a leader in the building industry, who generously shares her time and talent with her community. We are so pleased to recognize her for her many accomplishments and for the example that she sets for future construction leaders.”

Jeffries says, “It feels incredible to be recognized for something you do every day and enjoy. I was a lucky one; I knew early on that I was going to build buildings. Granted, it takes a team, but I love being part of that team.”

When her son is asked what his mom does for a living, he simply says, “She builds hospitals.” With almost twenty years of experience in healthcare construction, Jeffries has the perspective of an owner, a general contractor and much more. Her experience includes Joint Commission Accreditation Surveys, CMS Surveys and IDPH annual surveys. She also has an MBA from Lindenwood University.

Jeffries is encouraged by the enthusiasm she sees from students when she speaks at her alma mater. She says, “My last guest speaking session was to seniors, who were engaged and asking questions. Many already had jobs lined up.”

Jeffries says there are many reasons to pursue a career in construction. She says, “There are many aspects of the construction industry. If you think you’re interested, have a conversation with someone. Tour a job-site. I went the college route and have a degree in construction engineering, but my brother works with tools. I was one of two females in my graduating class. There is room for everyone with all different interests.”