Tim Masa is Vice President and serves as a market leader focused on our commercial, developer, and electric cooperative business. Tim is a LEED Accredited Professional who has been involved with several monumental projects while at Paric including the 1,100 acre master-planned Winghaven community, Express Scripts World Headquarters Phases I, II, III, and IV, as well as the economically significant Northpark in St. Louis County. Tim also spearheaded the 2009 development of Cooperative Building Solutions, a complete turn-key approach for rural electric cooperatives.

Tim earned his Bachelor Degree in Civil Engineering from Washington University. He continued his education at Washington University and received his Masters in Construction Management. After interning at Paric during graduate school, he started full time in 1997. Tim has earned quick success at Paric and was promoted to Project Executive in 2006 and to his current position as Vice President in 2012.

Tim serves as a Board Member of Logos School in St. Louis. He is a member of the fundraising committee for Zion Lutheran High School as well as the Co-Chair for the Building Committee at Zion Lutheran School. Tim is also a coach for his sons various sports teams. 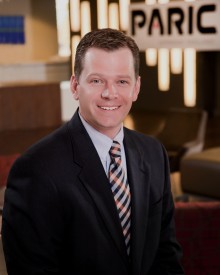