Volunteering at Work with Operation Clean Sweep in Walnut Park 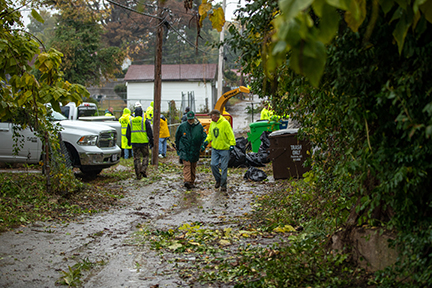 On Sat. Oct. 27, PARIC continued a tradition of volunteering at work in Walnut Park, participating in Operation Clean Sweep, a day of cleaning up urban streets. Better Family Life organizes and hosts this event several times a year, and PARIC has partnered in this event since its inception a few years ago.

Employees giving back is quite common in the cosntruction industry. Employees from prominent construction employers in St. Louis worked alongside residents and community members to clean up and remove abandoned lots. When buildings languish with no one to look after them, it effects more than the structure itself. Research shows that these empty shells contribute to crime and make life more challenging for the people who live alongside them.

PARIC Project Executive William Lowery organized the company’s involvement this year, recruiting volunteers and building excitment within the company. He also toured the area with the City of St. Louis and Better Family Life before the event. He explains, “Mostly because of age, a lot of the residents can’t maintain their properties the way they could when they were younger. And some of them are raising grandchildren or great-grandchildren, and the kids can’t go outside because it isn’t safe.”

Throughout the day, community members came up to the PARIC tent and asked to help. So, Lowery gave them protective gear and put them in work groups. Despite copious amounts of rain, Lowery says, “Everyone had a sense of accomplishment. Though it was miserable work, they were happy. People smiled as they dumped rainwater out of their boots.” Meanwhile, residents honked, yelled, “thank you,” from their cars and offered volunteers both hugs and tears of gratitude.

In just one morning, Operation Clean Sweep volunteers cleared out three streets, three alleys and filled five dumpsters with debris, chipping branches and nuisance trees along the way. These efforts required the use of 50 chain saws, weed eaters and blowers. Outside of Operation Clean Sweep, PARIC has paid for the lawn-cutting and other maintenance tasks of lots in this neighborhood.

James Clark, vice-president of community outreach at Better Family Life, says, “Clean Sweep: Walnut Park was amazing and spiritually uplifting. More than 200 volunteers braved the cold and rain. Neighborhood residents were pulled to tears at the showing of sincere support for their neighborhood.”

Regarding PARIC’s participation, Clark says, “PARIC has set an example for other corporations that are interested in neighborhood investment. PARIC has provided book bags and supplies for neighborhood students. Most recently, PARIC has partnered with Jubilee Landscaping to maintain 112 vacant lots in the Walnut Park neighborhood.”

One of the things that often brings our team together is volunteering. At work, we know that people need to value the culture as much as their individual job duties. Read more about PARIC culture and career opportunities here.