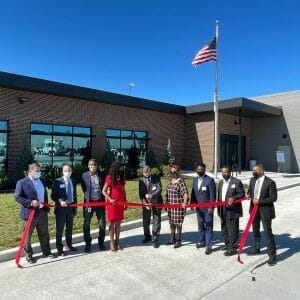 “We appreciate that Ameren Missouri is continuing to invest in this community by keeping an operating center on Geraldine Avenue,” said St. Louis Mayor Tishaura Jones. “Reversing decades of disinvestment in North St. Louis is a top priority for my administration, and I hope Ameren Missouri is the first of many to invest in modern facilities and businesses that serve North City residents.”

The new North Metro Operating Center, located at 4440 Union Blvd., is built for up to 70 Ameren Missouri employees and serves more than 135,000 customers in North St. Louis and surrounding communities. It replaces and expands the company’s Geraldine Operating Center, which stood adjacent to the new facility and served the community for more than 60 years. This is one of many investments Ameren Missouri is making as part of its Smart Energy Plan, a multi-year effort to strengthen the grid and bring more resilient energy to Missouri.

“We had long outgrown the Geraldine Operating Center, but it was important to us that Ameren Missouri remain in North St. Louis,” said Ameren Missouri President Marty Lyons. “With the expanded footprint of the North Metro Operating Center, we can keep our crews close to the neighborhoods they are serving, so we can respond safely and quickly to issues as we work to keep energy reliable for our customers.”

KAI Build and PARIC are proud to have been a part of this transformative project for North St. Louis. This is the eighth joint venture project between PARIC and KAI over the past 20 years.

“Ameren Missouri’s origin is that of joining forces to produce a cohesive solution for its community. In that same vein, PARIC Corporation and KAI Enterprises partnered to deliver the North Metro Operating Center,” said Keith Wolkoff, PARIC president. “The outcome of that collaboration is a state-of-the-art facility that will not only help revitalize the North County Region and provide reliable service but is a point of pride for all involved.”

Construction on the North Metro Operating Center began in 2019 and provided hundreds of jobs for area workers, while also utilizing the company’s network of diverse suppliers. Ameren Missouri worked with 28 diverse suppliers on the project and spent 38% of project funds with these vendors.

“What this facility does is bring hope to this community. Kids drive by this facility with their families and ask, ‘what are they doing over there?’ Something is going on where somebody cares about what happens in this community,” said KAI CEO Michael Kennedy, Jr. “We just went through COVID; we have a tremendous digital divide in our communities, especially on the north side, and these kids had to connect to school and get access to power to do school online. This is the type of infrastructure and investment that we need in our communities to make sure we can instill hope in these kids.”